This week has been a jam packed week here in DC. In addition to the Appropriations process and a few conferences (more on those later), the fifth round of negotiations for the EU-US trade deal (TAFTA, the TransAtlantic Free Trade Agreement, or TTIP, the Transatlantic Trade and Investment Partnership) happened on the George Mason University School of Law campus.

As part of our work through the Citizens Trade Campaign, we participated in a press conference to highlight some of our concerns including the need for transparency, preservation of our safeguards and sovereignty. Here are some photos from the press conference. 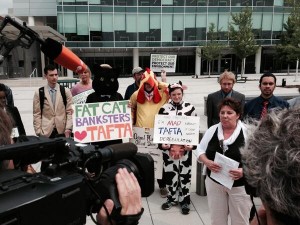 Tyler and Rachel dressed as a Chlorinated Chicken and Mad Cow respectively, with Patrick from Global Trade Watch as the Fat Cat. 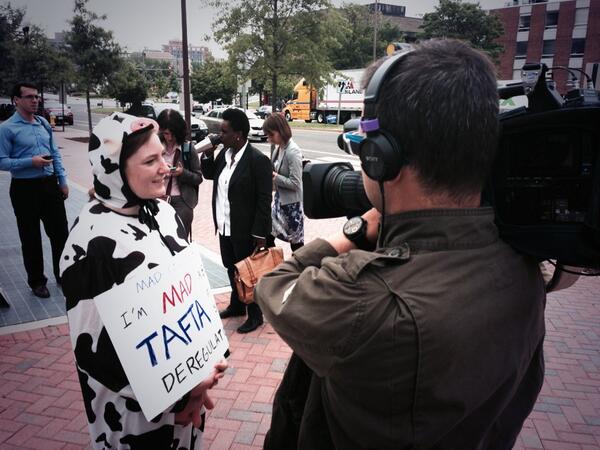 Rachel being interviewed by German tv regarding protections for food safety standards, among other regulatory measures. 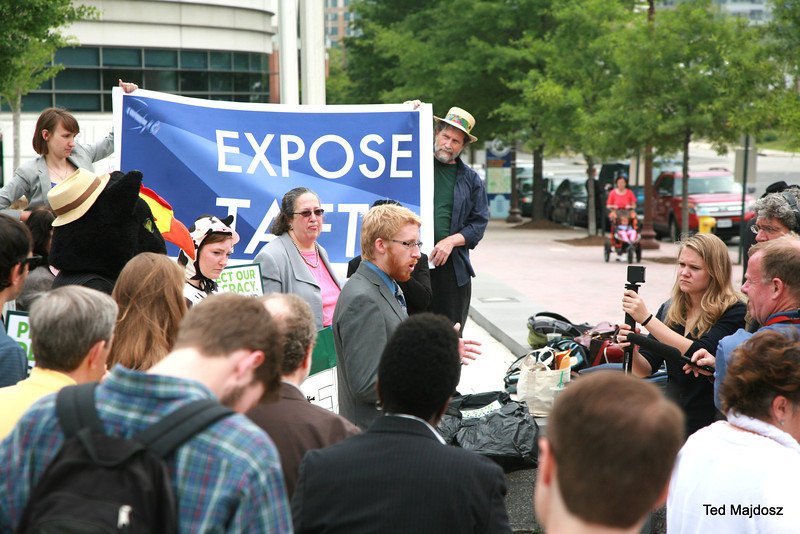 More photos can be found here. We also live tweeted as much as we could from the rally and from the stakeholder day (@FamilyFarmCo #SaveOurSafeguards #ExposeTAFTA #TAFTA). Kathy, along with a number of allies in CTC, presented and took questions from negotiators and industry representatives present.

Based on recent news coverage and statements made during the stakeholder day, it is clear that TAFTA’s momentum is slowing. The harmonization of regulations process was widely discussed. There are concerns the harmonization process will weaken regulations both here and in the EU and create a system, through the investor state dispute settlement (ISDS), that will severely hinder federal, state, and local regulations in the future. The biggest factor affecting TAFTA seems to be the likelihood with which Trade Promotion Authority (TPA, the “new” Fast Track) will pass through Congress. Given the upcoming election cycle, it will either happen before July or not until the lame duck session. If TPA passes, Congress will effectively abdicate it’s constitutional role to control our foreign trade policy and both TAFTA and the TransPacific Partnership (TPP) will be handled exclusively by the Executive Office and the USTR. (If TPA doesn’t pass, TAFTA and TPP will be, more or less, dead in the water.) We still have one final fail safe with TAFTA – each member of the European Union has to agree to it. Given the current political situation in Germany, among other countries, it may become politically impossible for TAFTA to be ratified, restarting the whole process.

We at NFFC are staying up to date on this process and will continue to update here and in our newsletter.