Global supply chain disruptions, rising prices for food and farm production inputs, increasing evidence of agriculture’s impact on climate change, and an unconscionable rising number of people experiencing hunger and food insecurity is the reality of our world in 2022. With these global realities in mind, the World Trade Organization’s 12th Ministerial meeting was held in Geneva, Switzerland during the week of June 12.

With the WTO failing to come to consensus in the past, the ministerial was held at a critical moment. As media outlets reported, unnamed experts were questioning the relevance and future of the WTO. The UN Special Rapporteur on the Right to Food, Michael Fakhri, has frequently and fervently spoken about the inadequacy of the WTO, in coordination with the World Bank and the International Monetary Fund, to address food security. WTO Director General Ngozi Okonjo-Iweala was feeling the pressure to get results.

The global movement La Via Campesina assembled a delegation of farmers and farmer organization representatives from around the world in Geneva to draw attention to the negative impacts that the liberalization of trade and free trade agreements, promoted by the World Trade Organization, have had on farmers, food security, biodiversity, and climate change. LVC has denounced and challenged the World Trade Organization and its unjust rules since 1999.

Two additional LVC members and I formed the North American delegation. Tyler Short is a beginning farmer and farm worker in Kentucky, Family Farm Defenders board member, and co- coordinator for the Youth working group of the Civil Society and Indigenous People’s Mechanism representing LVC. Celeste Smith is a member of the Oneida Nation, one of the Six Nations of the Grand River Territory, and Co-Chair of Canada’s National Farmers Union International Program Committee. 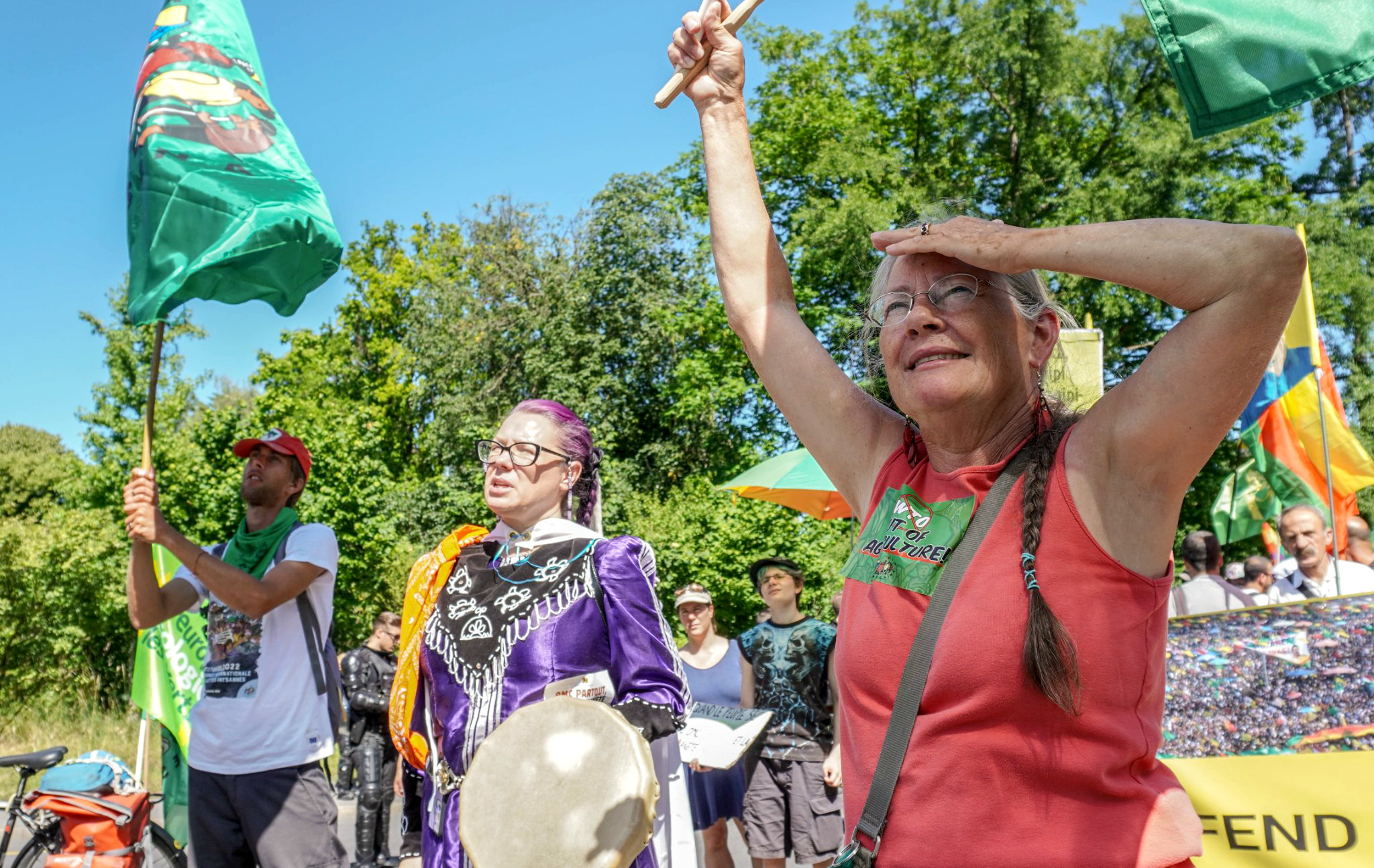 On Saturday, June 11, we were joined by an estimated 500 protesters as we marched through the streets of Geneva demanding that the WTO get out of agriculture completely and put an end to free trade agreements. At stops along our progression through the city, delegates made powerful speeches.

Our demands were clear. Although free trade agreements enable countries to have no barriers to trade, benefitting both exporting and importing countries, agricultural trade requires unique considerations. As Peter Rosset’s 2006 book title says, Food is Different. For example, independent national food supplies may be threatened when countries are forced to accept imports that undermine their own farmers. They may lose their political independence. They lose their cultural and traditional foods. They become dependent on imports, destroying communities and creating food insecurity. Farmers are often at highest risk, because their income depends on selling their products to “middle men” and food manufacturers at disastrously low prices.

Throughout our week in Geneva together, farmers and other food producers shared their experiences and the negative impacts of the WTO and its promotion of free trade agreements. I recognized the similarities between their stories and those of farmers here in Iowa in the fragility and irrationality of the globalized agriculture system.

Farmers from France, El Salvador, and Spain told how they were being propagandized to ‘get big or get out’ and that they must invest in expensive technology, seeds, and chemicals. The role of market speculators is one cause of higher food prices. The over-reliance on imports by some less developed countries and their indebtedness has created food insecurity and hunger. Destroying natural habitat for monocrop oil plantations, grabbing land to grow crops for livestock feed and ethanol, large-scale fruit and vegetable production, and raising corporate-owned livestock in confinements further exemplify how free trade agreements and WTO rules harm farmers, communities, and the environment – and take away any possibility of achieving food sovereignty.

The National Family Farm Coalition has long called for the principles of parity to be applied to agriculture and trade, and the WTO delegation from India was strong in its call for similar policies. Beginning in the fall of 2020, millions of farmers from across India protested for over a year to reinstate minimum support prices, much like parity prices, and for the WTO members to come to an agreement on food reserves, or public food stockholdings. 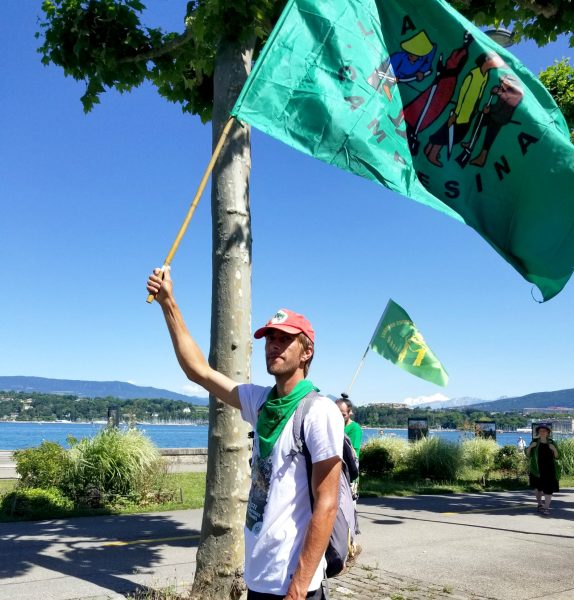 La Via Campesina delegates, through our march through Geneva, video testimonies, and a livestreamed press conference, stated clearly that food production for local and territorial consumption should be the first goal of agriculture policy, and that trade can contribute to food security. Any agricultural trade between countries must be negotiated on the basis of human rights and the needs of people and the environment, not the benefit to corporations and powerful exporting countries. The implementation of the United Nations Declaration on the Rights of Peasants and Others Working in Rural Areas (UNDROP) is key to a human rights framework. Trade must be based on cooperation instead of competition. It must not destroy the production of cultural and traditional foods, but support farmers, fishers, and all food producers and workers in agroecological systems.

As the essayists at the Disparity to Parity Project have articulated, each country must be able to protect its farmers with price supports so that the buyers of farm products pay farmers fair, parity prices. Each country must be able to protect its environment with supply management mechanisms based on a focus of sustainability, biodiversity and climate resilience. And, countries need to build their own public food stockholdings to control price swings. These are the policies needed so that all the world’s people, farmers and food producers included, will have stability, not volatility and fragility, in our food system.

In contrast, the public bipartisan and corporate-friendly narrative of American agriculture tells us that we need to produce more. The disruptions in grains and oilseed trade from Ukraine and Russia is being framed as an opportunity to capture markets for US farmers. Politicians have made a habit of promising new markets for farm commodities. Farmers are encouraged to mine the Earth for greater yields with the help of genetically engineered seeds, synthetic fertilizers, and a myriad of chemicals, applying Band-Aids to conservation practices to mitigate the damage to soil, water, and biodiversity. Free trade “gets the government out of the way”.

So, did the members of the WTO 12th Ministerial meeting in Geneva make progress toward decreasing food insecurity, increasing farmer livelihoods, and protecting the Earth and her precious resources? The spin from the WTO (and repeated widely by news outlets) was that the meeting was an “unprecedented” success.

The reality is much different. As LVC states, outcomes of this Ministerial Conference are “both alarming and disappointing. The Geneva package does not address the multiple crises of inflation, price rise, hunger, and global warming.” The public stockholding agreement advocated for so strongly by the Indian farmers was not in the final package, but was again delayed. Import dependent countries have little impact in negotiations with powerful and influential exporting countries, including the United States. The propaganda coming from this WTO Ministerial meeting shows the disregard for the millions of people who still face hunger.

For us to have any chance of achieving our goals and to end food insecurity at home and elsewhere, the World Trade Organization must get out of agriculture. The energy, hope, and enthusiasm of this mobilization gives renewed focus to the real solutions to the injustices and inequalities of the corporate-dominated food system. With each day in which more people are suffering and hungry, or on the brink of food insecurity, the need to transform our food system is more urgent. The world cannot wait. We need food sovereignty now.