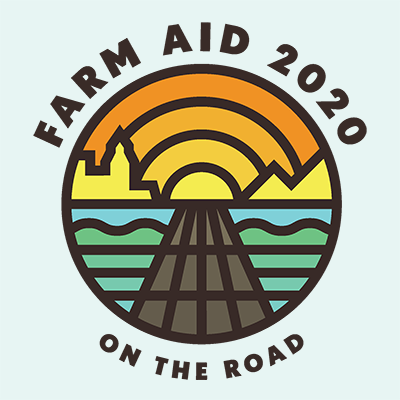 For over a decade, this time of year has marked the start of a road trip to Farm Aid for me. It all started back in 2008 when I was only the director of the Northwest Atlantic Marine Alliance and continued when in 2018 my job expanded to also include being NFFC’s director (check out our shared leadership model story). As with just about every other gathering, the string broke in 2020. No road trip with a van full of supplies, people, and seltzers! No HOMEGROWN Village adventures. No press conference where the musicians get all of us stirred up and inspired. But there will be a Farm Aid! It’ll be virtual, and although I’m looking forward to this virtual Farm Aid Festival on September 26, I already miss all the hustle and bustle that has gone into getting ready for, being present at, and recovering from Farm Aid!

So I thought I’d put together my top memories to commemorate the years of Farm Aid while getting ready to hit the Virtual Road to Farm Aid. 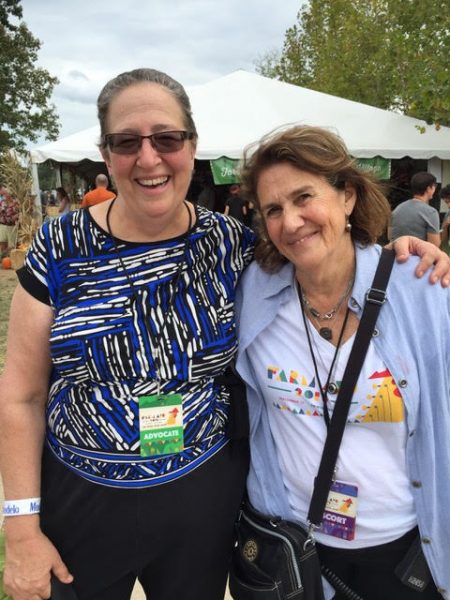 It’s impossible for me to talk about Farm Aid without remembering Kathy Ozer, NFFC’s long time executive director who lost her battle to cancer in 2017 and whose shoes I pretend to fill every day. Aside from leaving her indelible fingerprints and vision on the food and farm movement over her decades of activism, Kathy is the reason I can even have “top memories” about Farm Aid. It was 2008 and as a new member of NFFC, Kathy suggested NAMA should come to Farm Aid. Living outside of Boston, near the festival site that year, it was easy for me to say yes. That was the first time I met Kathy. Her warm embrace of NAMA’s work and vision for seeing how connecting our land and sea food providers made strategic sense laid the groundwork for the collaborations that have emerged. Farm Aid honored Kathy at their 2017 Festival by giving her the first “In the Spirit of Farm Aid” award posthumously.

Friendships and Collaborations. The #Road2FarmAid is paved with deep collaboration and camaraderie between old and new friends. Every year we would team up with NFFC member groups to imagine what our presence would look like, who should be present, and what message we really want to send to the Farm Aid audience. Over the years, Farm Aid has provided a space for the kind of cross collaboration that will ultimately lead us to win the battle for food justice and ensure that what we eat matches our collective values, including making sure those who feed us can live with dignity and get paid a living wage.

In 2018, an unprecedented moment happened when Christine Nobiss and three other Indigenous young people opened up Neil Young’s set with a powerful message about why family farmers and Indigenous people must work together to stop the corporate takeover of our food system and natural resources, and address climate change. We had met Christine earlier that year when America the Bountiful tour arrived at the Nisqually Nation for the Indigenous Environmental Network’s Protecting Mother Earth Gathering. The six minutes they had on stage was magical and emotional. 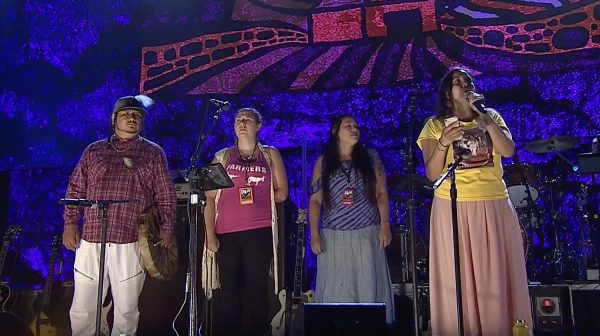 Scheming with the Farm Aid team. Some of my favorite conversations have happened with the Farm Aid team who start planning every little bit of the events months in advance. Who should speak? What are good topics for the gatherings leading up to the Festival? What kind of events should be incorporated into the days ahead? Who should we invite to join us?

Almost without fail, the farmers, ranchers, and fishermen we have brought to Farm Aid have told us how meaningful the experience was for them. The connections and opportunities offer significant benefits, but being in a space where everyone wants what’s best for them is not something they experience every day. And for family farmers who work so far away from those who end up eating the fruits of their labor (literally!), this is even more rare. I’ll always remember the parting words of Mr. Melvin Jimmerson, a cattle rancher from Georgia, as he was leaving for the airport. I told him “I’m so grateful you could join us,” and his response was “not as grateful as I am!”

Bringing Our Message to Millions. What’s really cool about the Farm Aid family is that they make us feel like we’re at home when we’re at Farm Aid. As such, we are invited to engage with others who have come under their roof. Considering that the Farm Aid Festival brings millions of people under one roof once a year, that’s quite a guest list.

That’s why we often wait to release our most pertinent messages at Farm Aid. Last year we launched our Fair Prices for Dairy Farmers campaign there. With the Festival being held in Wisconsin – a state that brings cheese to almost everyone’s mind – we couldn’t let the occasion pass without letting people know the economic injustice experienced by those who put that cheese on our tables. Clad in blue t-shirts, our family farm members and allies shared a message with the concert goers: we can’t expect family farmers to live in the red while corporate agriculture reaps the profits. 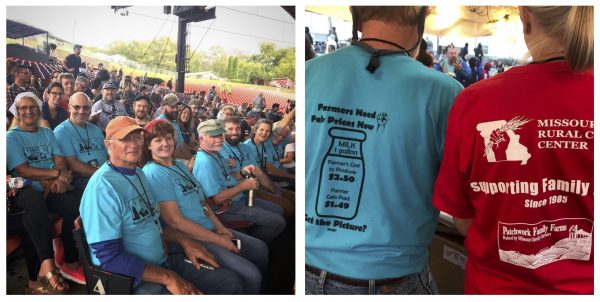 Good Food from Land and Sea. The food one eats at a Farm Aid Festival isn’t just any kind of food! It’s value-ful food. One of the favorite concession stands at Farm Aid is Patchwork Family Farms, a project of the Missouri Rural Crisis Center, which has been fighting factory hog farms for decades. MRCC was established with a grant from Farm Aid in 1985 as both groups addressed the 1980s farm credit crisis. The line of people waiting to get a bite of Patchwork’s beautiful pork chops, ham steaks, and bratwursts literally doesn’t stop till they run out of food. They are so popular that almost every year many of us don a pair of gloves and lend a helping hand behind the counter slinging pork chops! 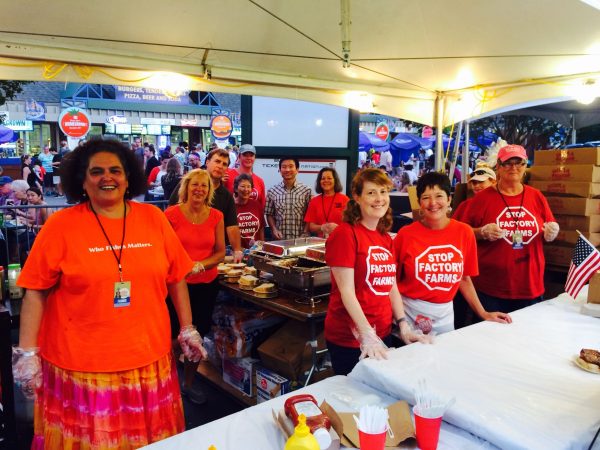 Being a part of the NFFC family is what led NAMA to introduce seafood from community-based fishermen at Farm Aid gatherings for over a decade. The most memorable was in 2016 when Farm Aid came to Virginia. Thanks to Sharon Peele Kennedy of Buxton, NC, we were able to get 100 lbs of Pamlico Sound shrimp and 100 pounds of Spanish Mackerel to feed the crew and artists. Consolidation of the seafood industry has led to little access to processing and transportation for small-scale fishermen’s catch. That didn’t stop Sharon! She got the Island Hopper that typically transports medical supplies and organs heading to critical transplant procedures to ferry the seafood there! Every time I get together with the Farm Aid culinary team we recall the story and have a good laugh about the shrimp traveling in an ambulance. 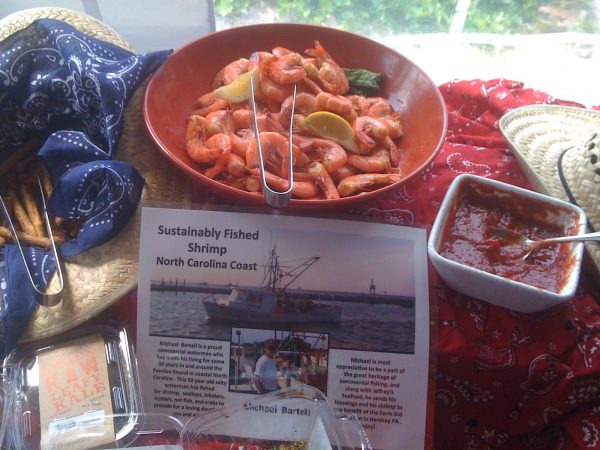 Games and more games! Farm Aid’s HOMEgrown Village is a place for public interaction and political education, but not for paper distribution. Every year we put our most creative foot forward to come up with interactive games for engaging the public in critical issues affecting family farmers and food providers. The Price Is Wrong! Let’s Make a Grab! and, the Wheel of Farming and Fishing, which actually made it into a video story by the Washington Post with NFFC VP Betsy Garrold (Food for Maine’s Future). 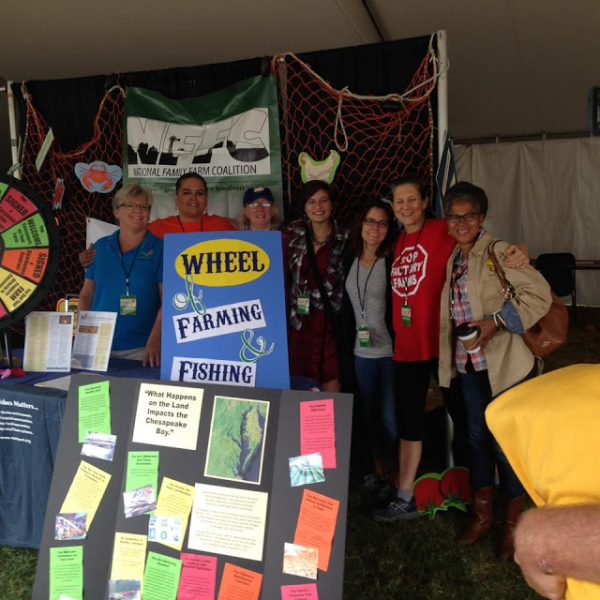 My favorite, though, might be The Price is Wrong game – designed to help eaters realize how much of the corporate profits and our eating habits are subsidized by farmers, ranchers, fishermen, and food workers. We debuted the game at Farm Aid 2013 in Saratoga Springs, New York. 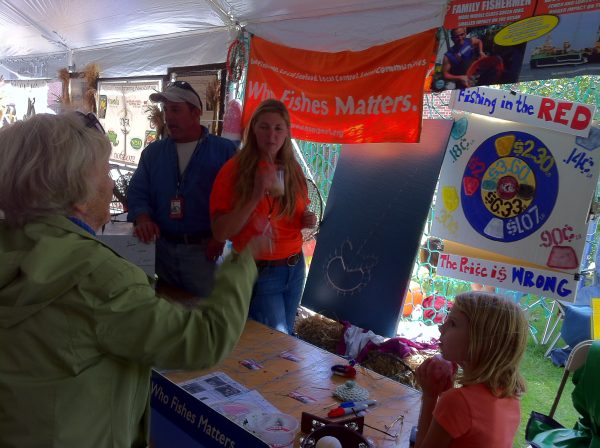 Music to the Ears! And last but not least is the music at Farm Aid. We are so grateful to the artists, not only for their beautiful music but for their willingness to share their talents on behalf of family farmers year after year – for Willie Nelson and his friends it’s been 35 years. In some ways that’s a drop in the bucket compared to how long family farmers have struggled, but it’s a significant drop because it lifts the spirits of family farmers more than they may realize. And, that goes a long long way to keeping farmers doing what they love: putting good food on their communities’ tables. 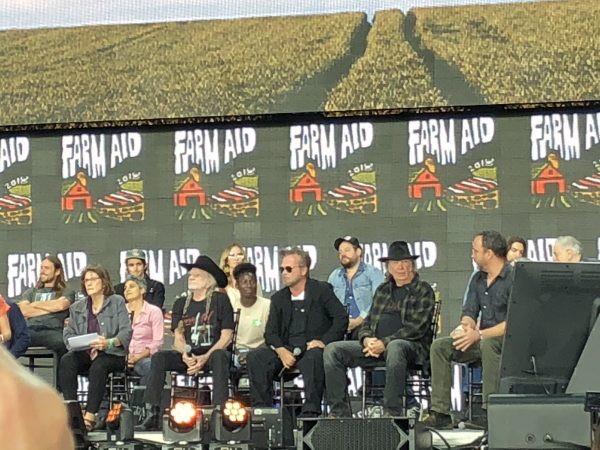 I always come home from Farm Aid exhausted! It’s the kind of exhaustion that makes you realize fighting corporate power is tiring, but it’s possible. And you know that because you just came back from hanging out with a few thousand people who are committed to standing up for values across our food system, starting with those who catch, raise, and grow both our land and sea food.

Thank you, Farm Aid and family! 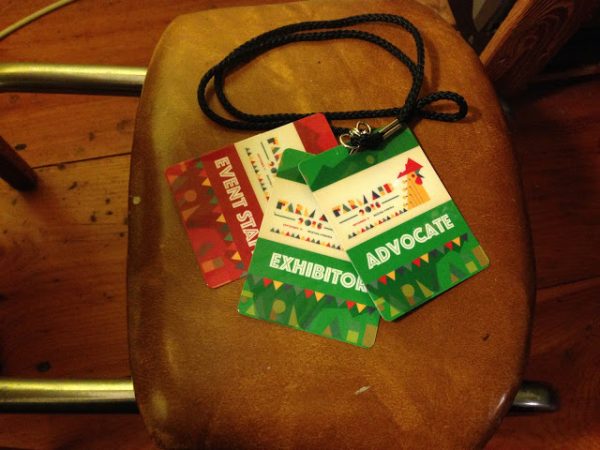