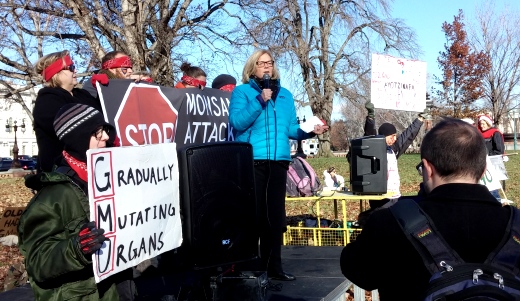 On behalf of the family farmers, ranchers and fishermen we represent, the National Family Farm Coalition (NFFC) urges you to oppose H.R. 1599, the Safe and Accurate Food Labeling Act. H.R. 1599 proponents claim it would establish a national standard for labeling products containing GMOs. In reality, this bill fails to provide more accurate labeling and significantly curtails the ability of state, local and municipal governments to protect their constituents.

H.R. 1599 would establish a voluntary national standard that companies could use to label their products as GMO-free, but FDA guidelines have provided this option for companies since 2001. An overwhelming 88 percent of consumers favor required labeling of food products containing GMOs in a Mellman Group study, but H.R. 1599’s voluntary program would also allow companies to label products containing GMOs as ‘natural’, which is vague and misleading to consumers.

H.R. 1599 would invalidate dozens of state and local laws across the nation. The GMO labeling laws that citizens and legislators worked for diligently in Vermont, Maine and Connecticut would be preempted. Furthermore, H.R. 1599 would block laws creating buffer zones around schools and hospitals to protect children and patients from pesticide exposure, as in Hawaii.

For non-GMO farmers, H.R. 1599 would be disastrous as it would preempt laws designed to protect them from GMO contamination of their fields. Farmers have already suffered through the contamination of wheat, rice and other crops, having lost export dollars to Asian markets that demand non-GMO varieties. Without strong regulations and oversight, farmers’ crops and livelihoods are at risk in ways that they, their families and their communities cannot afford.

Striking down the laws around food and food production that a broad array of citizens and officials have worked to enact undermines the democratic processes guaranteed by our constitution. The NFFC asks you to oppose H.R. 1599, thereby preserving the rights of people to know what they are growing and consuming.