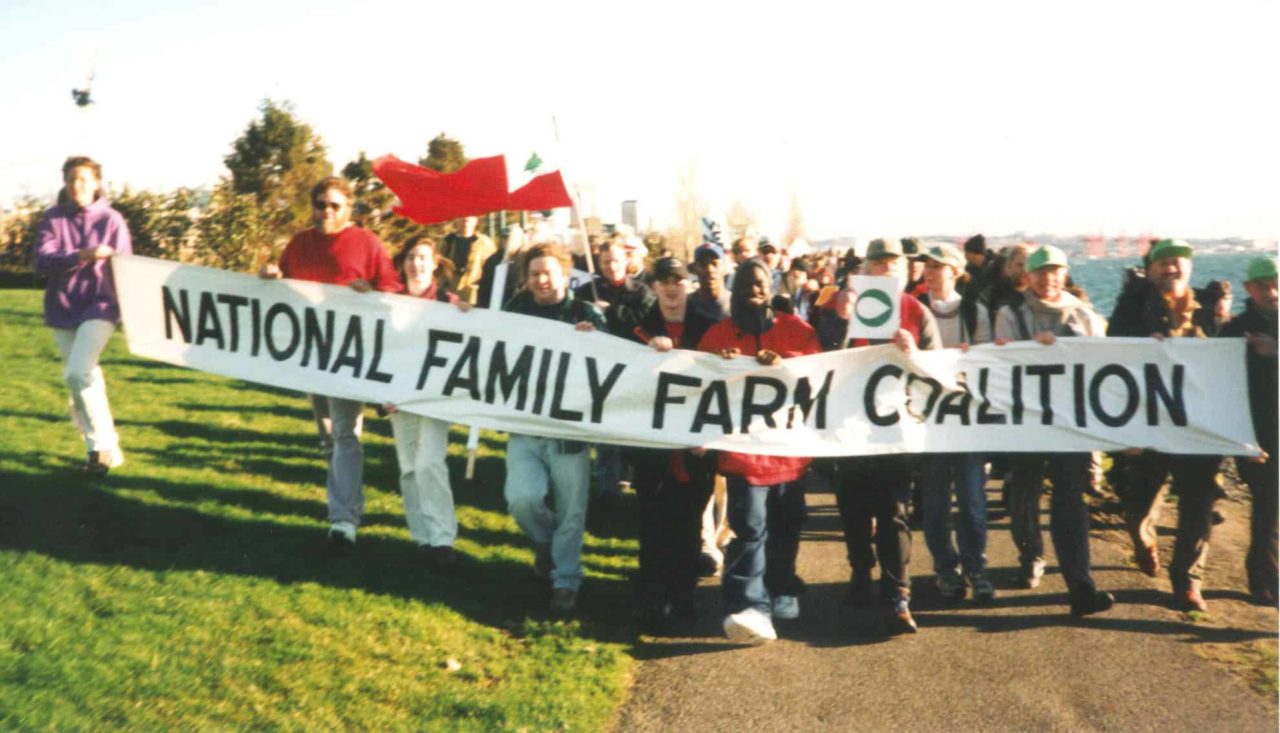 April 17 is the International Day of Peasant Struggles, observed by La Via Campesina (LVC) every year to remember the 1996 Eldorado do Carajás massacre. It also highlights the continued criminalization, oppression, and repression of peasants, workers, and Indigenous communities worldwide.

Via Campesina is the world leader of food sovereignty, having started the international movement in 1993 to lift the roles of peasants, Indigenous peoples, and rural workers around the globe. Today, the movement represents more than 200 million small-scale food producers in 81 countries. For the 30th anniversary of La Via Campesina, we celebrate the international movement and collective struggles for a world in which all people have the right to choose where, how, and by whom their food is produced.

NFFC members joined protests against the World Trade Organization along with La Via Campesina.

As the first US member of La Via Campesina, NFFC has taken an active role in the work for decades. NFFC protested the 1999 World Trade Organization conference in Seattle with Via Campesina members and joined thousands of people at LVC’s 2003 march against the WTO conference in Cancun, where Korean farmer Lee Kyung Hae made his historic sacrifice. NFFC was involved in the 2007 Nyeleni process in Mali –  the global consultation to determine the future of the food sovereignty movement – and is part of the third Nyeleni process, organized in the US this year by the US Food Sovereignty Alliance (USFSA) and the International Planning Committee for Food Sovereignty (IPC).

NFFC has long been an ardent defender of food sovereignty. As a coalition of family farmers, ranchers, fisherfolk, and rural advocates, the tenets of food sovereignty are at the very core of NFFC’s vision for a fair farm and food system. The movement seeks to put power back into the hands of local producers and consumers, and to resist the corporate consolidation of our food system. It demands the dismantling of oppressive systems that ruin farmer’s livelihoods and diminish consumer choice. While the prevailing industrialized food system cares only about profit, food sovereignty is more holistic – encapsulating health and wellness, sustainable growing practices, a stable supply chain, fair prices and wages for all food providers, and above all, self-determination.

Food is a basic human right, not a commodity. It’s time to dismantle our industrialized food system and to restore power to the many instead of the few.