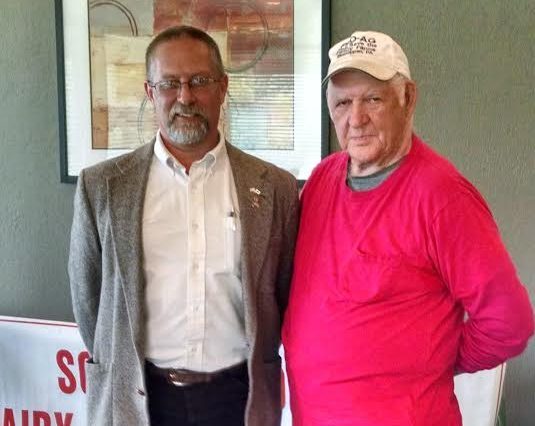 Sixteen dairy farmers testified at last Tuesday’s milk hearing held at Perkins Restaurant in Tunkhannock, Pennsylvania.  According to Arden Tewksbury, Manager, Pro-Ag, “The dairy farmers told it like it is down on the farm.”   The hearing was attended by aides to Senator Bob Casey’s office, Senator Pat Toomey’s office, Rep. Lou Barletta’s office, and an aide was there from State Rep. Karen Boback’s office, and Wyoming County Commissioner Tom Henry attended the hearing.

Tewksbury continued, “There were some real tear-jerker true stories told by various farmers who testified.  Clearly, what we have been saying about the conditions on many dairy farms was exposed at the hearing.”

Unfortunately, while Pro-Ag’s hearing was being conducted, the United States Congress agriculture sub-committee hearing was being held in Washington DC.   Tewksbury said, “We tried to get some real dairy farmers to testify at the DC hearing, however as usual, the presenters at the DC hearing were mostly not real dirt farmers, but they represented the industry, not the real farmers.”

Tewksbury continued, “We sure would like to be able to send people like dairy farmer and Wayne County Commissioner Brian Smith, dairy farmers Walter Barnes, Robin Fitch, and Brenda Cochran to a DC hearing as well as all others who testified on Tuesday in Pennsylvania.”

Pro-Ag has been illustrating figures for several months indicating that dairy farmers are losing approximately $9.40 per cwt. (100 lbs. of milk) as compared to 2014.  Even more sobering were Pro-Ag’s figures indicating that current prices being paid to dairy farmers in Federal Order #1 is $14.81 per cwt.  The price in the 1998/1999 era was $14.73.  Tewksbury said, “The US Congress must take immediate action on this ultra-serious financial situation and should be ashamed to allow this to happen and now, watch it get even worse. “

Furthermore, the information gathered at Pro-Ag’s hearing hopefully will be used to stimulate our local elected officials to take immediate action.  Everyone who testified supported the re-introduction of the Federal Milk Marketing Improvement Act (formerly the Specter-Casey bill; S-1640).

The recent announcement that the Class I (milk used for bottling) price for June has dropped 56 cents per cwt. to the dairy farmer, and will mean that all dairy farmers will sustain even further losses.

I hope that all dairy farmers and consumers who read this immediately call your US Senators and Congressmen and urge them to take immediate action to benefit the dairy farmers.

Equally important; we continue to hear from many agriculture support groups (feed dealers, suppliers, vets, etc.) as to how the dairy farmers’ low prices are having a drastic effect on their businesses too.  It’s time for all you people to speak up!