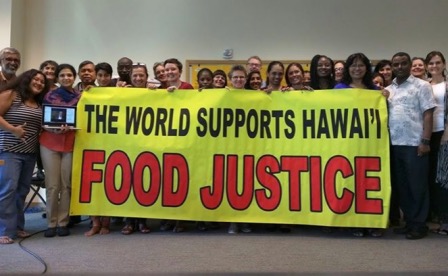 NFFC joined Pesticide Action Network at their January 2016 international meeting in Hawai’i to discuss plans for ending the proliferation of GMOs worldwide and the long-term GMO research on the island of Maui. The collaboration included the following proclamation.

We, as members of the international community from Asia and the Pacific, Africa, Latin America, Europe and the continental United States, convened by Pesticide Action Network, are gathered in Hawaiʻi in January 2016 to stand in solidarity with the movements in Hawaiʻi working to free the islands from the toxic influence of pesticide/genetic engineering (GE) corporations.

Hawaiʻi is ground zero for the development, experimental use and production of pesticide–promoting genetically engineered crops. Five chemical corporations –Syngenta, Monsanto, Dow, DuPont/Pioneer and BASF – facilitated by the government of Hawai’i – occupy tens of thousands of acres of the most fertile agricultural land, including public land which should rightfully be in the hands of the Kānaka Maoli (Hawaiian nationals). According to state law, water in Hawaiʻi is part of the public trust and cannot be privatized. Yet these corporations divert and contaminate this most precious and important common resource, leaving quality agricultural lands and key habitats without a source of water.

These land and water grabs are resulting in severe damage to the ecology of Hawaiʻi, and place the burden of health and environmental costs onto local communities, with no accountability for – or compensation from – the agrochemical industry.

These corporations are holding Hawaiʻi’s people hostage. Successful democratic processes on seven of the eight Hawaiian islands resulted in policies requiring disclosure of pesticide use, a moratorium on the use of genetically modified organisms (GMOs) until health and environmental effects are evaluated, and pesticide-free buffer zones around sensitive sites like schools and hospitals. Now the chemical corporations have sued all of the counties that passed such policies, stopping their implementation – for the time being.

We can look at Hawaiʻi to see the nature of these companies and their products: parts of the archipelago are sprayed as much as 250 days per year, or seven out of ten days year round. Many local doctors and nurses have submitted official testimony stating concern that they may be witnessing higher rates of asthma, hormonal diseases, rare cancers, miscarriages, birth defects, and skin disorders in communities living adjacent to experimental fields. Companies have fought even basic notification rules so that families and schools are unable to protect their children from regular chemical exposure.

Workers and their families are most impacted. Just two days ago, ten Syngenta agricultural workers were poisoned by Dow’s product chlorpyrifos and sent to the hospital on Kaua’i.  Agricultural workers around the world face similar dangers of acute poisonings and chronic long-term exposure. Similar to other plantations around the world, many of those working on agrochemical operations in Hawaiʻi are migrants that have themselves been directly displaced by corporate agribusiness.

Let’s be clear: none of the crops these corporations are growing feed people in Hawaiʻi; Hawaiʻi imports more than 90 percent of its food. The seeds grown in Hawaiʻi feed primarily factory farms and fuel cars. They are the foundation of the fossil-fuel and resource intensive, polluting, and climate-devastating industrial agricultural system. As has been acknowledged by the most prestigious international bodies, feeding the world sustainably requires a dramatic transformation away from this system.

That these corporations will act so boldly and rashly in the endangered species capitol of the world portends great threat to the rest of our global ecology and humanity. The fight to end the overuse of chemical pesticides and their increasing promotion through genetic engineering begins in Hawaiʻi, and extends around the world.

In Africa, these technologies are being pushed by the same corporations that are engineering hunger and working to control and patent staple food crops. In Asia, the debt engendered by these chemical corporations and their expensive, patented technologies, has driven rural crises, including an increase in farmer suicides. In the last ten years we have seen a heightened and very aggressive attempt to transform the landscape of ecologically sound food-producing land to genetically modified crops. Brazil, Argentina and Paraguay have become the “transgenic soybean republic,” with devastating health impacts from the associated rise of pesticide use. In Mexico, birthplace of maize, there is strong resistance to genetic theft and GMO maize. In the continental United States – where around half of the farmland is planted GE crops — farmers are facing fewer market options, higher input costs, superweeds, and damage to surrounding crops and ecosystems, while too many rural families face cancer, diabetes, and Parkinson’s disease.

We link our struggles to the struggles of the people of Hawaiʻi. We pledge our commitment to stand together and organize our communities to protect our homes, our children, and our shared planet. The agrochemical industry is global and so is our collective fight.

Together, we will work towards:

To find out more about the situation and struggle in Hawaii: 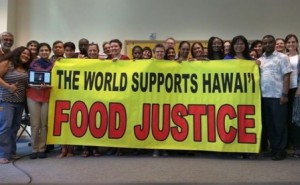