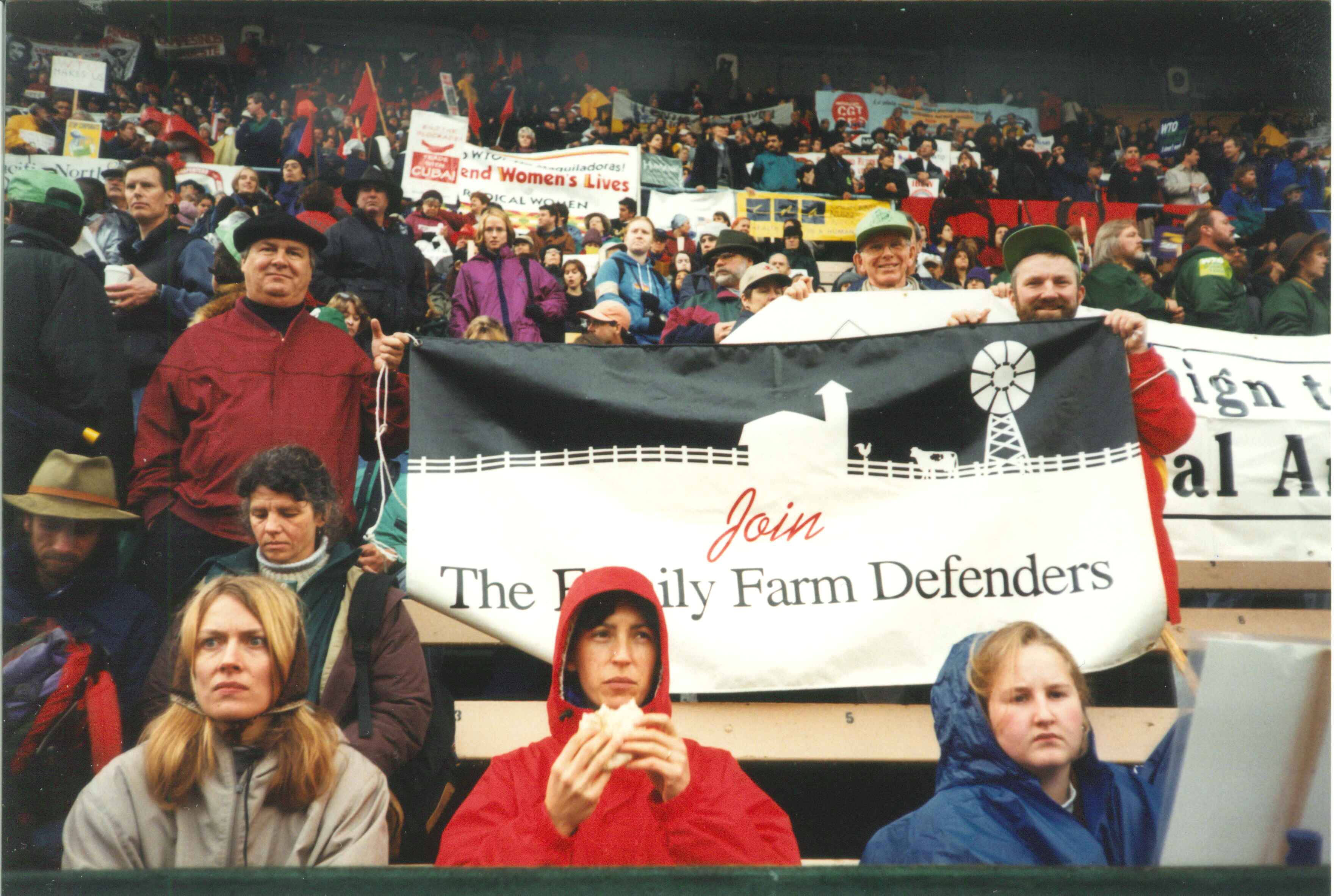 “This is what democracy looks like!” – that was but one of the chants heard on the streets of many cities for the Global Climate Change Strike – a slogan that originated on the streets of Seattle almost two decades ago. When the images and voices of 50,000+ people shutting down a global convergence of wealthy elites rippled across media outlets in late Nov. 1999, the “Battle of Seattle” caught many by surprise. Corporate free trade apologists were quick to disparage the protesters as part of a misguided “anti-globalization” movement, apparently unaware that the forces behind the direct action had been cultivating north-south solidarity for quite awhile – a new more powerful form of globalized resistance from below. Family farmers/fishers, migrant farm/food workers, and indigenous communities were critical to this grassroots victory – in particular, La Via Campesina (LVC) and its many U.S. allies such as Family Farm Defenders (FFD) and the National Family Farm Coalition (NFFC). It was in such epic struggle that the seeds of food sovereignty found fertile ground.

I was but one of many who helped organize this historic encounter that brought together a vast array of radical environmentalists, labor unions, anarchists, global justice advocates, and – of course, family farmers, farm/food workers, and other supporters of global food sovereignty. In fact, my very first night in Seattle – Mon. Nov. 29th – I was able to link arms with Vandana Shiva outside the corporate-sponsored WTO welcome celebration. This action was in part organized by Jubilee 2000, a largely faith-based grassroots campaign to expose and eliminate odious debts that had come onto the scene at the huge protest surrounding the G8 Summit in Birmingham, Scotland in 1998. In Seattle, the citizen blockade meant many elites were not able to get to the kick-off “cocktail party”, and all those uneaten hors d’ouevres were later dumpster dived to feed hungry protesters at the convergence space.

Earlier in the day I had caught up with John Kinsman and Francis Goodman of Family Farm Defenders, Medea Benjamin of Global Exchange, Ronnie Cummins of the Pure Food Campaign (later the Organic Consumers Association), Dr. Ridgely A. Mumin Muhammed of the Black Farmers and Agriculturalists Association, and other food sovereignty activists outside the downtown McDonalds for a slow food protest picnic. This was the first time I met José Bové, the iconic farmer activist with Confédération Paysanne who had recently used his tractor to “dismantle” another McDonalds in France.  Bové had somehow managed to smuggle several blocks of his own Rocquefort cheese through U.S. Customs and shared it with the crowd – a wholesome alternative to the junk food or “la malbouffe” as Bové described what was being served inside. Activists with LVC and NFFC had met earlier to plant trees in a Seattle park, and farmer delegates from over 30 countries would continue to build cross border solidarity at various teach-ins and protest actions throughout the rest of the week. At each such event the pungent smell of smuggled Rocquefort was detectable – some folks had saved their souvenir cheese!  Within an hour of the protest picnic, the Black Bloc came through, and this McDonalds was also promptly “dismantled.”  The Black Bloc would take out many other corporate targets – Bank of America, Starbucks, Warner Bros, Niketown, Gap, Old Navy to name but a few – over the course of the next few days.

Long before many of us arrived in Seattle, backdoor deals had already been made.  Most notably, the AFL-CIO had promised government officials that their Tues. Nov. 30th post labor rally parade through Seattle’s downtown would be used to siphon off protesters from participating in the actions to physically shutdown the WTO meeting that were already planned by the Direct Action Network (DAN).  But this co-optation strategy soon unraveled as labor activists broke through the “peace police” to join their comrades that had been clogging the streets around the Convention Center since 6:00 am that morning. Among the many militant unions that defied the “labor bosses” in Seattle were the International Longshore and Warehouse Union (ILWU), the Steelworkers, and the Industrial Workers of the World (IWW). By 10:00 am Seattle police had already launched their first unprovoked attacks against peaceful protesters occupying 6th Avenue, including myself. Word quickly spread through indymedia that the “Battle for Seattle” had begun.

Judi Bari was not in Seattle (she had passed away in 1997 from a long struggle with cancer), but the fruits of her organizing work with the Redwoods Summer Campaign was evident among many of the Earth First! and the IWW activists who did show up for the protest.  I was lucky enough to have met Judi Bari while I was a student organizer at Reed College in Portland, OR back in the late 1980s, along with another inspiration ecofeminist, Starhawk, who was in the streets of Seattle.  Many of the young activists who traveled with me from the Midwest to Seattle had been inspired by EF! direct action protests against the Crandon Mine in northern WI in 1997, as well as the Minnehaha Free State resistance to the Highway 55 bypass in Minneapolis, MN in 1998. The Indigenous Environmental Network (IEN) – with lots of heavy lifting from Tom Goldtooth – convened a whole series of solidarity events between native activists and their allies in Seattle. Among the indigenous participants were members of the U’Wa from Colombia, resisting ecocide at the hands of Occdental Petroleum and the rest of the violent fossil fuel industrial complex.

The mutual enemy that brought so many family farmers, farm/food workers, fisher folk, and indigenous activists to the Battle of Seattle was industrial agribusiness and neoliberal capitalism. Thankfully, the grassroots resistance inheritance we brought with us had even deeper historic roots, like the tallgrass prairies and old growth forests that pre-dated settler colonialism. The 1970s farm crisis that swept across the Heartland had convinced many rural folks to “raise less corn and more hell” – as did their populist ancestors a century before – and prompted the American Agriculture Movement (AAM) to organize a massive tractorcade demanding an end to farm foreclosures and a return to parity pricing that shut down Washington DC for weeks. In MN in the 1980s the “Bolt Weevils” inflicted millions of dollars in damage to unwanted high voltage powerlines, inspiring Dana Lyons’ EF! folksong classic, “Turn of the Wrench.”  Flagrant price rigging and anti-trust violations by the dairy giants in the 1990s prompted WI farmers to again dump milk – as their grandparents did back in 1933 – and stomp on blocks of Kraft Velveeta outside Gov. Tommy Thompson’s office in the State Capitol.

Back on the streets of Seattle the tide had already turned by noon on Tues. Nov. 29th with official cancellation of the WTO’s opening session – not enough delegates could reach the venue. Authorities had exhausted their cache of pepper spray and tear gas and scrambled to dispatch a captain by plane to a military weapons depot in Casper, WY to resupply. Seattle firefighters had refused to turn fire hoses on their union brothers and sisters.  Hundreds of protesters and bystanders had been arrested and soon clogged detention centers (often for absurd reasons such as speaking to media or driving a taxi), but more activists simply took their place in blockading streets and impeding WTO delegates. Radical cheerleaders kept morale high, while Food Not Bombs delivered sustenance. Hip Hop artists from South Central LA were among those reclaiming public space, blasting “TKO the WTO” from a mobile sound vehicle courtesy of Alli Chaggi-Starr with Art and Revolution. By 3 pm Seattle’s mayor had thrown in the towel, declaring a state of emergency, a blanket curfew, as well as a fifty block wide “no protest” zone.  Pres. Clinton’s arrival on Wed. Dec. 1st to address the WTO meeting, along with a couple hundred National Guard troops, could hardly extinguish the raging dumpster fire.

More importantly, this “street heat” was being acutely felt inside the residual WTO negotiations. Delegates from the Global South looked outside the convention center windows and could see for themselves that public opinion in the U.S. was not as monolithic in favor of the “free market” as they had been told by corporate apologists. Thinly veiled threats of economic retaliation from US Sec. of State, Madeline Albright, and US Trade Rep., Charlene Barshefsky, hardly helped, and ultimately many delegates simply walked out. As a post WTO collapse press release from the Organization of African Unity (OAU) stated, they were fed up with “being marginalized and generally excluded on issues of vital importance for our peoples and their future.”

On Thurs. Dec. 2nd food sovereignty and anti-biotech groups took to the streets again in one of the more tranquil marches of the “Battle of Seattle” with nary a police officer in sight. Protesters gathered at a farmers market to distribute organic apples and then marched to a rally outside the Seattle headquarters of Cargill. A new “solidarity in struggle” identity was emerging, and I will never forget being with John Kinsman as he proudly proclaimed he was a peasant, too, as we marched together with LVC colleagues from Mexico, South Korea, South Africa, and India.

The fundamental demand of protesters in Seattle was a moratorium to WTO negotiations. Some went further, calling for abolition of the WTO itself, along with the other two post WWII  “Horsemen of the Apocalypse” – the World Bank and the International Monetary Fund.  Premised upon neoliberal capitalism, they were beyond any reform. Their mere existence violates food sovereignty in so many ways – from forcing countries to trade food against their will, privatizing the commons (water, seeds, land), and denying people the right to know where their food came from and how it was produced, as well as weaponizing hunger as a tool of state terrorism. As one LVC protester in Seattle remarked, “you cannot put sugar coating on a rotten pie.” After the meeting collapse, LVC sent a tongue and cheek “thank you” to the WTO for helping to unify small farmers worldwide: “During the weeklong work in Seattle, we have now succeeded in globalizing the struggle and globalizing our hopes.” Thanks to the “Spirit of Seattle” the concept of food sovereignty was also popularized among grassroots activists and has now “trickled up” to radically transform future U.S. debates about food/farm issues.

Speaking before the American Sociological Society Meeting in DC in 2016, Filipino academic and activist, Walden Bello, reflected back on those historic days in late 1999: “In Seattle, ordinary women and men made truth real with collective action that discredited an intellectual paradigm that had served as the ideological warden of corporate control.” The Battle of Seattle was a critical inflection point in a growing global grassroots movement, bridging generations of seasoned activists and weaving together diverse resistance struggles. When West Coast longshore workers arrived in Madison, WI in March 2011 to support the “Cheddar Revolution” against Gov. Walker’s union busting austerity budget this was no accident – such solidarity was crafted in Seattle back in Nov. 1999. When Midwestern family farmers traveled to Standing Rock, ND in 2016 to support indigenous water protectors in their struggle against tar sands pipelines and extreme fossil fuel extraction this was no accident– such solidarity was nurtured in Seattle back in Nov. 1999. Twenty years on, the “Spirit of Seattle” continues to inform and inspire many activists today, and clearly points the way to another world being possible.