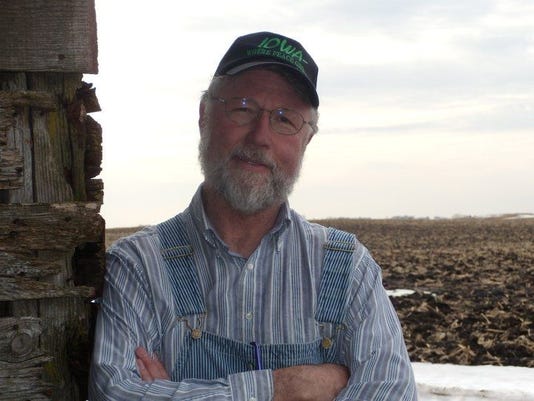 Here we go again. Presidential hopefuls are descending on Iowa like saviors from on high, feigning to listen to “we, the voters.” With frequent news stories about how our farming practices affect others downstream (like water consumers in Des Moines and fishers in the Gulf of Mexico), or how patented GMO seed and toxic pesticides get promoted around the world as a godsend for poor hungry people, it should be evident that as Iowa goes, so goes the nation and so goes the world. With so much at stake, we should be very clear about our vision for agriculture.

From the looks of it, giant agribusinesses and their spokespeople intend to drown out the voices of everyday Iowans by aggressively promoting a vision of agriculture that puts the interests of big-money corporations before people and our environment.

A clear example of this is a high-profile political gathering in Des Moines on Saturday, proclaimed as the “Iowa Ag Summit” by its sponsor Bruce Rastetter, agribusiness investor and major political donor. His investments in ethanol and hog factory companies and his campaign contributions have paid off handsomely, landing him a powerful position on the Iowa Board of Regents. While many politicians and candidates are invited, the only questions will come from Rastetter himself. Feel left out? Won’t this really be just a “Corporate Ag Summit,” given Rastetter’s long record of making money by putting profits before people, our air, land and water?

Similar to what I witnessed during the 1980s farm crisis, corporate agribusiness groups and their financially supported politicians will claim there’s nothing to worry about. (They said, “What farm crisis? Farmers that go broke are just bad managers.”) They’ll recruit everybody into thinking that their vision of agriculture, the status quo, is the only way forward. They will say consumers only want cheap food, so hog confinements, nitrate and pesticide pollution, and decimated rural communities are part of the bargain.

The agribusiness vision is not the only or best vision, especially for family farmers. You need to know that independent farmers won’t benefit from the agribusiness status quo. Farm prices are already headed down as herbicide-resistant GMO seeds have helped bring 157 million acres of new land into production around the world. The straitjacket of the corn-soybean rotation will result in fewer and fewer farmers to the point our land will be farmed without farmers! Furthermore, all the many weed, pest and disease problems we face today will get worse and only be addressed with more GMO seeds and more chemicals that go with them.

It’s time for us to speak out, recognize that Rachel Carson’s “Silent Spring” (published in 1962!) foretold our situation, and remember the wisdom of Jesse Jackson’s position in his 1988 presidential race: The best urban policy starts with the best rural policy.

There is a different vision and set of policies that serve rural and urban folks alike, young and old and future generations while restoring the all-important biodiversity that has been lost. Progressive organizations support the thousands of young women and men already taking on the challenge of growing healthy pesticide-free produce for local markets or raise livestock on their family farms rather than in factory farms.

Nobody wants their drinking water contaminated with toxic chemicals, fertilizer and manure. We need policy that makes sustainable, non-polluting kinds of farming the norm, not the exception. It’s your food, your water, your air, our future.

We must speak out and demand that this kind of economic opportunity be restored to rural America!

GEORGE NAYLOR has raised non-GMO corn and soybeans on his family’s farm in Greene County since 1976. He is a board member of the Center for Food Safety and a past president of the National Family Farm Coalition. He will be a featured speaker at the Food and Ag Justice Summit in Des Moines, March 6-7. For more information, go to: iowacci.org. Contact: moonbeam@wccta.net