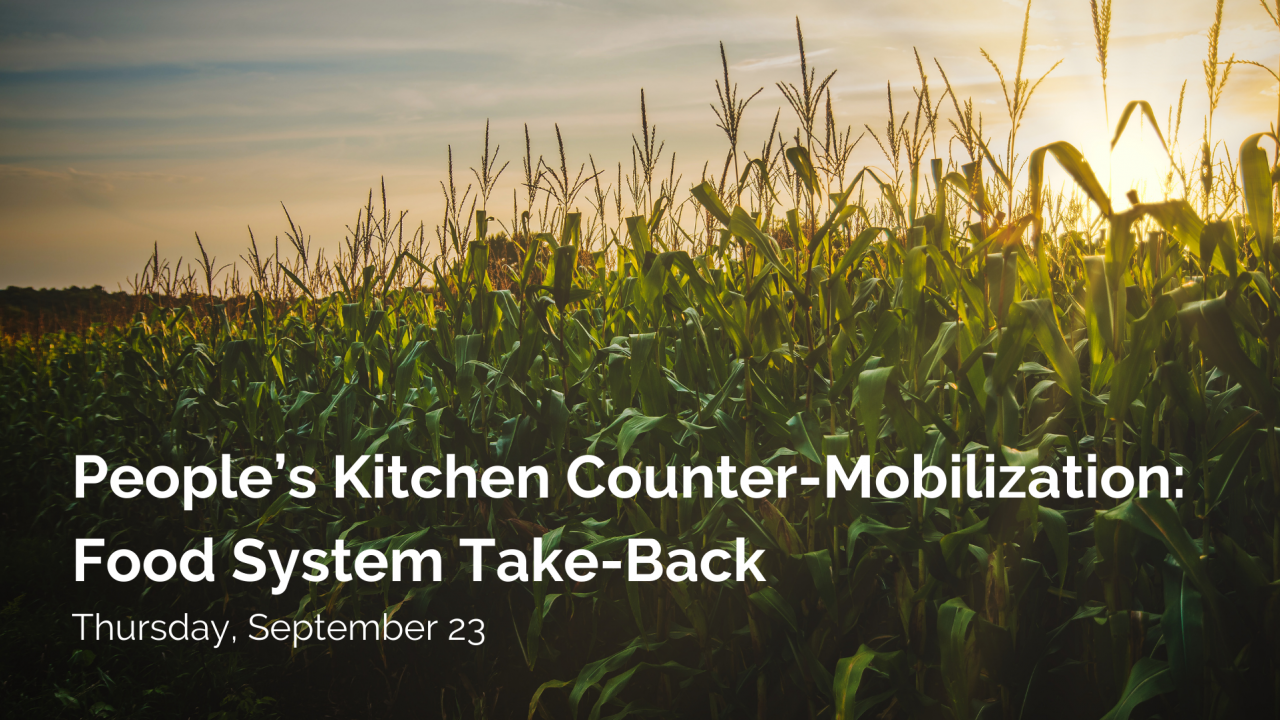 New York, NY — A diverse alliance of food system advocates, including Indigenous communities, family farmers and ranchers, and community-based fishing people from around the globe, have been sounding the alarm about the upcoming United Nations Food Systems Summit (UNFSS). In concert with the global resistance, a North America-based coalition of food justice organizations will be hosting the virtual People’s Kitchen Counter-Mobilization: Food System Take-Back on the same day as the UNFSS — September 23, 2021. This virtual event will elevate the voices and concerns of those whose hands put food on our collective tables and are being marginalized by the UNFSS’s process.

“Contrary to what the organizers claim, the UNFSS is not the people’s summit,” said Niaz Dorry, executive director of the National Family Farm Coalition. “The UNFSS has been taken out of food providers’ hands and put squarely in the pockets of food corporations. We need to return power to the people who grow, harvest, transport, and make our food.”

The coalition’s resistance to the UNFSS arose when instead of entrusting the UN Committee on World Food Security as the primary forum for participatory and democratic policy-making for food systems, the UN allowed the World Economic Forum to take control of the plans. In the process, the UNFSS has been transformed into a costly platform for corporate powers.

“From the beginning, the World Economic Forum and other financial forces have corrupted and co-opted the UN Food Systems Summit,” said Patti Naylor, an Iowa farmer and member of the National Family Farm Coalition who represents the North American Region on the Coordinating Committee of the United Nations’ Civil Society and Indigenous Peoples’ Mechanism. “This summit is a flagrant display of the corporate takeover of our public institutions.”

Carl Wassilie, A Yup’ik biologist who has long advocated to protect Salmon and their ecosystems says, “It’s important to not just talk about food, but about the spiritual and cultural relationship to the food and where it comes from. For me, as a Salmon person, we have a sacred relationship with salmon and how it relates to the community well-being and cultural values. The corporate takeover of our food systems is a direct threat to our cultural survival; and is also a threat to the ecosystem in which other animals, plants and insects that thrive from the existence of the salmon. Salmon is life.”

The People’s Kitchen Counter-Mobilization: Food System Take-Back will feature speakers from Africa to the Americas in four separate virtual conversations laying out their visions for a food system based on agroecology and food sovereignty. In addition to the speakers, the event will feature an opening blessing by Rachel Sayet and various cultural elements, including music. Interested parties may register for the five-hour event, beginning 10 AM EDT/ 7 AM PDT, at this link.

“The pandemic has taught us that our food system is designed to feed multinational corporations, instead of feeding people culturally and nutritionally rich foods,” said Anna Mulé, executive director of Slow Food USA. “That’s why communities around the world must design their own food, agriculture and fisheries systems — and not let global food corporations co-opt them.”