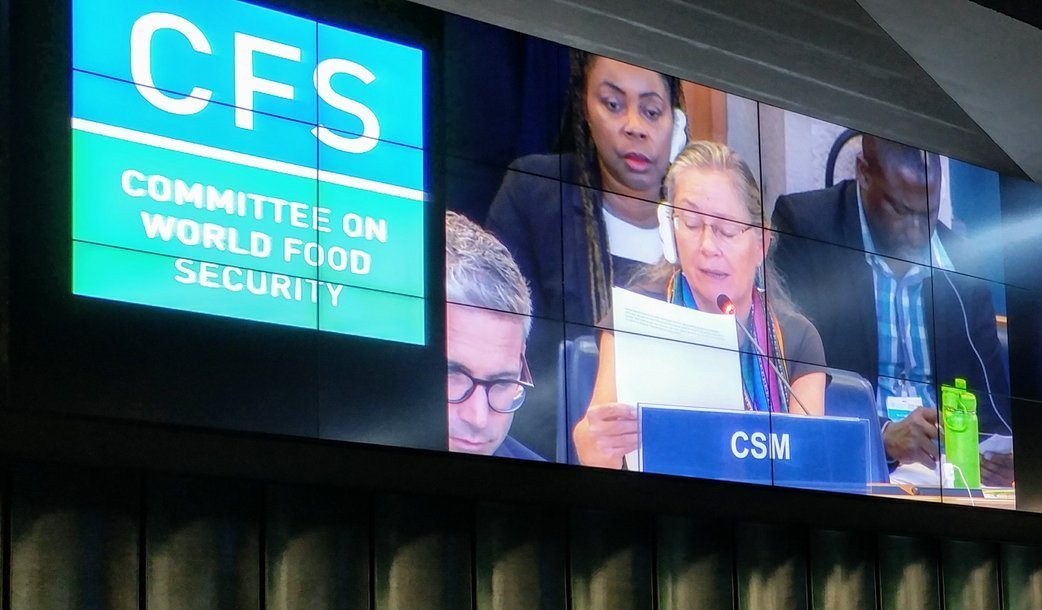 Bringing the Family Farmer Voice to the International Stage

In October, I traveled to Rome to participate in the United Nations’ Committee on World Food Security 46th annual conference (CFS46) at the Food and Agriculture Organization headquarters. The Committee on World Food Security (CFS) is the only global food and agriculture policy forum where farmer organizations have an equal voice to governments. I was there as the alternate Coordinating Committee member[1] for the Civil Society and Indigenous Peoples’ Mechanism, North America region. The Civil Society and Indigenous Peoples’ Mechanism (CSM) was founded in 2010 as a permanent organizing space for representatives of food producer organizations and social movements to coordinate collectively in the CFS. Joining this space, I represented National Family Farm Coalition, the US Food Sovereignty Alliance, and La Via Campesina-North America. It seemed as though I was wearing many hats, but the support of NFFC staff and allies – including IATP, ActionAid and some in the academic world – made for a valuable learning experience in this complex, many-layered United Nations policy-making space.

NFFC made the decision to take on this new role within the Civil Society and Indigenous Peoples’ Mechanism to further its international presence and find opportunities to uplift the voices of US family farmers, fishers, and ranchers. By engaging in this work, NFFC has made an ongoing commitment to be involved in this inclusive and participatory space in order to advance the CSM US federal policy goals, and to be a US farmer voice of dissent against our government’s pro-corporate, anti-farmer rhetoric in the United Nations system. This comes at a time when the number of people on this planet who live in food insecure situations has risen for the third year in a row, now estimated at 820 million people. It also comes with the recognition that corporate representatives, particularly from the US dairy industry, have recently occupied these UN policy spaces.

One important aspect of the CFS work is challenging the agribusiness narratives and US government policies and actions undermining the livelihoods of farmers, ranchers, and fishermen, which we had opportunities to do in Rome. CSM participants scheduled a meeting with our Canadian and US government representatives in which we brought up several issues, including the need to take a holistic view of food systems (incorporating social, environmental, and economic health of rural communities) when making nutrition policy; the interconnectedness of commodity prices, trade agreements, and hunger; and the science behind the concept of farmer-led agroecology.

Before the meeting ended, I handed US Ambassador Kip Tom a letter written by NFFC, the US Food Sovereignty Alliance, and other allies calling on the US government to cease obstructing agroecology and to promote the livelihoods of family farmers over corporate profits. The connection we made – from an Iowa family farmer representing civil society to an Indiana farmer representing our government – was a valuable interaction. However, the Ambassador’s public comments supporting corporate innovation (such as GMO seed monopolies) in the CFS show that we must continue to insist that the US recognize and uphold the principles of agroecology, values that NFFC has long advocated.

When Ambassador Tom spoke at the CFS Agroecology Plenary (page 20), he said “…we [the U.S. government] strongly disagree with the criticisms of biotechnology and regret that the [HLPE Report on Agroecology and other Innovations] report fails to take into account the history of the safe use of biotechnology innovations … farmers using biotech seeds are doing more to protect the climate and sequester carbon than those using conventional seeds.” As an Iowa grain farmer, who, with my husband George, has transitioned from conventional to organic crops, I have firsthand experience that this statement from Ambassador Tom doesn’t tell the whole story; in fact, it misleads the public.

Our Civil Society and Indigenous Peoples’ Mechanism rebuttal to Ambassador Tom was powerful: “Industrial agriculture is one of the biggest contributors to the ecological crises [sic] which is now the fight for survival for many. It is also a major cause of poverty, hunger and malnutrition including through grabbing of resources, concentration of power, homogenization of diet and exposure of young people from rural areas. … The HLPE report demonstrates that agroecology is the only transformational option to address all the structural changes needed in our food system in a systematic and integrated way and shows that sustainable intensification and climate smart agriculture can only provide one dimensional solution via incremental changes. … Agricultural innovation is essential as long as it does not lead to further concentration of knowledge and power.”

We made strong statements during other plenaries and side events to counter the US government and private sector positions on biotechnology, and uplifted the need to formulate policies that recognize and ensure basic human rights, including the right to food. Youth, women, fishers, and peasants were well represented in delivering these statements. During the plenary launching the UN Decade for Family Farming, I had the honor of reading the civil society intervention, a transcript for which may be found here, with my statement beginning on page 9.

In addition to the annual CFS conference held in Rome, which this year focused on Agroecology and other Innovations, the CFS also holds policy consultations with food and farming stakeholders in regions throughout the world. These consultations enable farmers to present policy ideas and proposals directly for themselves without going through a government agency or traveling to Rome. I served as NFFC’s farmer representative at the University of Maryland for the North American Regional Consultation on Food Systems and Nutrition in November. The purpose of this consultation was for the CFS to gather insights and recommendations from North American stakeholders in the process of developing a set of international voluntary guidelines. Those of us in the CSM worked to ensure organizations representing diverse communities participated at this consultation, including indigenous, food justice, people of color, and women. Although the US Department of Agriculture appeared to exclude or limit such participation, I am pleased to report that the Civil Society and Indigenous Peoples’ Mechanism was very well represented and made multiple interventions to the discussions. The summary of that consultation may be read here.

The United Nations is a complex space which recognizes diplomacy in matters of disagreement, negotiation for resolving differences, and processes that ensure all perspectives are included and respected in order for countries and citizens to work for a better future.

After attending the CFS46 meeting in Rome, and the regional CFS consultation in Maryland, the challenges facing family farmers in the US and the rest of the world are clearer to me than ever. Recognizing this common struggle, I am convinced of the importance of NFFC engaging in the CFS to bring US farmer voices to the table, build global partnerships, and hold our government accountable. We live in a complex and globalized world, and family farmers need a voice on the international stage that speaks truth to the corporate power that is undermining our livelihoods. I look forward to continuing this work with the National Family Farm Coalition, and allies, in 2020.