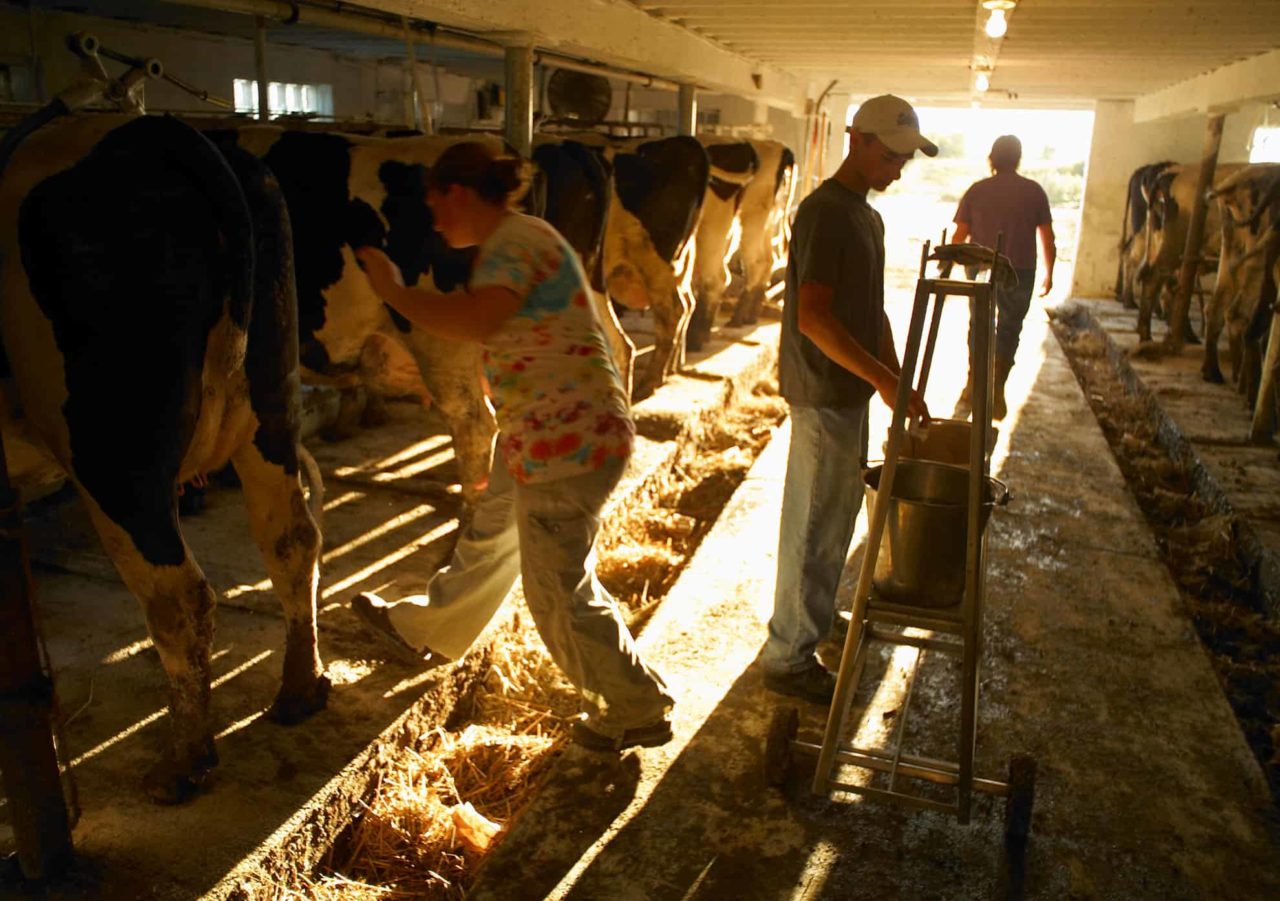 The first day our milk was sold as certified organic, in 1999, we thought we had it made. The market for organic milk was growing and there was no reason to believe the growing consumer demand would not continue. Whole Foods, Trader Joe’s, even regular supermarket chains were looking to get organic products on their shelves and for starters, that usually meant dairy.

There was a skill set one needed to develop while making the transition to organic, because being “organic by neglect” – just dropping prohibited inputs like antibiotics, hormones, synthetic pesticides and fertilizer and hoping for the best – wouldn’t work very long.

We also learned there was a lot to be said for growing your own feed as opposed to purchasing it. Again, there was that learning curve, but using pasture as part of a crop rotation of hay, grain and cover crops, at least once you figured it out, made you wonder why you ever needed pesticides at all.

No organic farmer will deny there are times when animals get sick, it is too wet to cultivate or it gets so dry you have to buy feed and you remember your past life as a conventional farmer, when there was a synthetic fix for the problem or feed that was an easy phone call away. But no one ever said farming would be easy; you just figure it out, learn from the problem and plan ahead.

There are accepted organic farming practices that work and most farmers learn how to manage their farms accordingly, they learn from each other and they follow the rules. That is important, following the rules – rules are, after all, based on management practices that work. No doubt organic farmers in New England have more difficulty growing grain than we do here in the Midwest, but since organic cattle are mostly out on pasture, no-grain or minimal grain feeding can work.

In drier parts of the West it can be difficult to meet the requirements of 30% dry matter intake from pasture during the grazing season without costly irrigation. That’s a problem most of us east of the Mississippi don’t generally have, but then most Western farmers don’t have to worry quite so much about moving snow and keeping water running when it drops to -20 either. We all have our management challenges.

When the National Organic Standards Board, which is made up of 15 public volunteers from across the organic community selected for their expertise in their respective occupations, makes a recommendation for a new rule or an interpretation of an existing one, USDA’s National Organic Program (NOP) must consider it carefully. When NOP puts rules for organic production in place, they need to be followed, farmers have to find a way. Again, if farming were easy everyone would be doing it.

NOP is, per their website, “… a regulatory program housed within the USDA Agricultural Marketing Service. We are responsible for developing national standards for organically-produced agricultural products. These standards assure consumers that products with the USDA organic seal meet consistent, uniform standards”.

Pretty straight forward – developing standards and assuring that organic products meet those “consistent, uniform standards”. Wouldn’t it be grand if all organic certification agencies and the USDA actually enforced those standards? If all organic products with the USDA Organic seal actually met those standards? Well, that would be a perfect world scenario and, unfortunately, that is not the world in which we live.

There are bad actors in every crowd, and it appears that when some processors, retailers and farmers saw consumer demand for organic growing, they also saw a market they could exploit, so they did. Most consumers of organic food are lured by the labels showing cows grazing next to a little red barn. That is what they want to buy, products from happy cows owned by profitable farmers that respect the rules, the environment and their animals.

And most organic milk is still produced that way. The barns are not always red, but most organic farmers still fit the image their customers see on the label.

But recent articles in the Washington Post describe a fact many small organic farmers have protested for at least ten years. There are many organic farms milking thousands of cows in operations that are little different than the conventional concentrated animal feeding operations (CAFO’s). Post reporters, during several visits to Aurora dairy in Greeley, CO, found only a few hundred cows grazing at any one time out of a herd of 15,000.

It is cheaper to produce milk this way, but it is not organic when the production system is not following the regulations. Organic certification is based on a yearly inspection, so there is a lot of trust involved, and in the case of these industrial organic farms, that trust has been betrayed. USDA has done little more than give Aurora and some others a slap on the wrist.

Aurora’s website states that “Aurora Organic Dairy is a leading producer and processor of high quality organic milk and butter for retail store brands”. These would be stores such as Walmart, Costco and Target. The sheer volume sold in these mega-stores does undercut a fair organic milk price, and the fact that there are questions about the integrity of organic milk from the industrial organic farms that supply them seems to make little difference to the mega-retailers.

Are dairy cows on certain mega-sized “organic” dairy farms meeting the grazing standards? Certainly they are eating something. The feed is supposed to be organic and organic farmers must provide paperwork proving the organic integrity of grown or purchased feed. Which brings up the questions of who is growing all this organic feed, and are they actually following USDA organic standards?

While the laws of supply and demand should encourage US organic farmers to increase production to meet the demand, as well as encourage more farmers to convert to organic production, it is not necessarily happening that way. US production accounts for about 60% of the organic corn and 20% of the soybeans needed to satisfy organic market demand. And while demand for organic grain is increasing about 15% a year, the deficit has and continues to be filled by lower-priced imported grain from the Black Sea Region of Eastern Europe (or so the shipping bills of lading claim.)

Why? Imported grain is cheaper, despite shipping costs. And it is cheaper because it is not organic. Peter Whoriskey reported in the Washington Post (May 12, 2017), “The label said ‘organic’ but these massive imports of corn and soybeans weren’t”. He describes a shipment of conventional soybeans from Turkey to California last year that somehow, in transit, became organic; at least the documentation said it was organic. This remarkable transformation boosted the profit margin on this one shipment, by Whoriskey’s estimate, to over $4 million.

When simply providing a false organic certificate can make conventional grain organic, it is easy to see why most organic grain farmers in the United States are losing money, and why many of our domestic organic grain producers are considering giving up on organic production entirely. Organic grain prices, like organic milk prices, are unsustainable, and farmers cannot survive a 30% to 50% price cut.

If one’s wages were cut 30% with no reduction in workload, that would be a big deal. Yet, that is exactly what organic dairy farmers have seen happen to their pay price over the past year. And the salt in the wound is the fact that, according to USDA Ag Marketing Service data, organic dairy prices at the retail level have actually gone up over the past year.

In my previous life as a non-organic dairy producer, we knew we were getting screwed. Processors always made a profit; the farmers, not so much. We thought organic would be different, there was supposed to be an ethical commitment to organic, not just on the part of the farmer, but the processor, retailer and, of course, the regulatory agency as well.

Small farmers who work hard and play by the rules? That appears to count for nothing in the organic dairy business. Fraudulent organic production of milk, grain, poultry or any other organic commodity is destroying the organic farming sector in the United States.

The solution is simple – the rules are on the books, they just need to be enforced. Why is that so difficult? It is not, but weak standards and failure to enforce standards is very profitable for some in the organic industry.

If consumers believe it is organic, if they believe USDA is insuring its integrity, they will pay more, farmers will get a fair price and industry will profit. Pressure on USDA does not seem to work. If USDA doesn’t correct the situation we can continue to expect low milk prices and another harvest season of continuing low grain prices. Organic farmers with integrity will lose out to fraudulent imports, CAFO organic dairies and poultry operations, but as long as the big retailers can sell the myth, it’s OK.

Those of us who still uphold that image of small red barns have struggled with drought, flooding and oppressive heat, but we have pastured our cattle as required by the NOP. We continue to grow our crops by the rules and we don’t raise our cattle, poultry or pigs in confinement.

We have provided a product that consumers expect when they buy organic, and we struggle to make it work economically – without cutting corners. How much longer we can survive really depends on whether or not USDA decides that organic rules need to be followed by everyone … no matter how big their farm is, or where they farm http://www.tbcredit.ru/zaymyi.html.