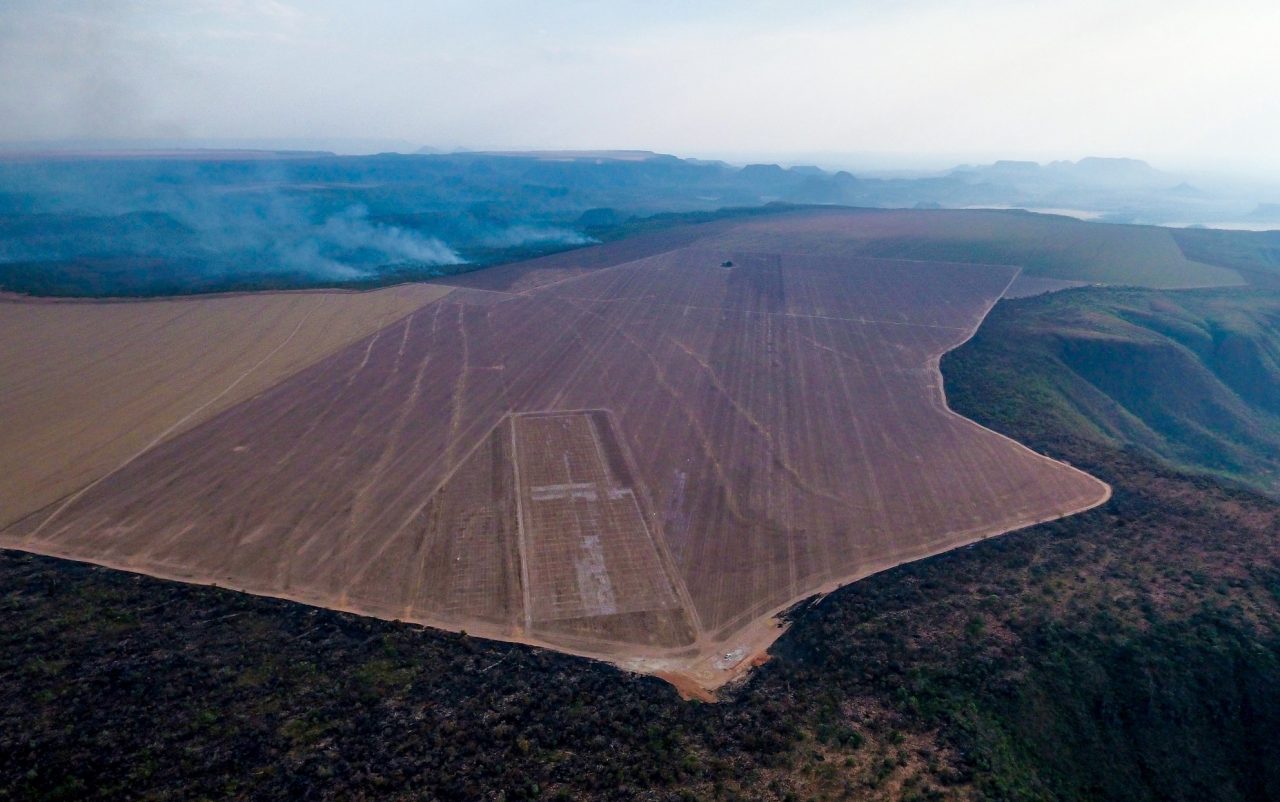 Originally posted at Institute for Public Accuracy on October 22, 2019

A new report details how Harvard University and U.S.-based pension fund TIAA are involved in forest firest burning in a key ecosystem — the Brazilian savannah (Cerrado). The report is based on satellite imagery and fire data from NASA to construct maps that show the correlation between the location of TIAA and Harvard farms in the Cerrado and fire hot spots. The maps show active fires and burnt forests next to and within TIAA and Harvard farms.​

A coalition of TIAA clients as well as environmental and human rights organizations are demanding that financial corporations stop speculating with forests and farmland. On October 18, Altamiran Ribeiro of Brazil’s Land Pastoral Commission, who works with the affected communities, and a group of TIAA clients delivered a petition with about 40,000 signatures to the Washington, D.C. office of TIAA. The petition calls on TIAA’s Trustees to hold the corporation accountable by stopping it from buying farmland globally, and especially in Brazil, and demanding that TIAA meet with communities to repair the damage. The petition and previous reports are available at: https://www.stoplandgrabs.org/en-us/.​

MARIA LUISA MENDONCA, marialuisam222 at gmail.com ​
Mendonça is a PhD in Human Geography and is director of the Network for Social Justice and Human Rights in Brazil and visiting research scholar at the CUNY Graduate Center.​

She said today: “Land speculation by pension funds and endowment funds, such as TIAA and Harvard University, is stimulating land grabbing and causing displacement of rural communities and environmental destruction. These corporations promote extensive mono-cropping of agricultural commodities, which cannot be sustainable. This agricultural system is based on chemical inputs and fossil fuels, constituting a major cause of climate change. The main area targeted by this process, the Cerrado (Brazilian savannah), is a unique ecosystem because of its rich biodiversity, river springs and rain cycles, which are connected to the Amazon and the Central-South regions of the country.”​

JIM GOODMAN, r.j.goodman at mwt.net, @familyfarmco​
Goodman is Board President of the National Family Farm Coalition.​

He said: “Short-sighted, power-hungry governments allow and incentivize corporate agribusinesses and land speculators to control the global food system for their one and only priority — profit. Burning off rain forests and savannas of Brazil and consolidating massive tracts of farmland in the U.S. will only cause more famine, more environmental devastation, and more economic suffering for family farmers and rural communities. These corporations and the financial institutions that support them, whether in the U.S. or in Brazil, must be held accountable.”​

He said today: “When financial actors like Harvard and TIAA invest in vast tracts of land in fragile ecosystem like Brazil’s Cerrado, they are promoting exactly the kind of agro-industrial development and corporate land concentration we need to move away from in the era of ecological collapse and climate apartheid. That their landholdings appear to be literally on fire should be a wake-up call to these firms and their beneficiaries that the business model they promote is the farthest thing from sustainable or responsible.”