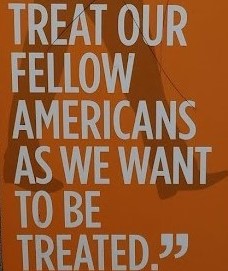 ​Most people have heard the phrase, “speaking truth to power”. It usually applies to people outside the seats of power, like Martin Luther King or Gandhi, railing against evil in all its ugly manifestations. Rarely have we heard presidents actually rail against the evil in the three branches of government.

Humankind’s greatest evil – racism – has been allowed to fester and erupt time and time again since humans walked upright. When governments allow racism to flourish, either covertly or overtly, that is evil. Jim Crow laws were evil because they stopped Black people from voting and undermined the ideals of democracy and political justice for everyone.

When the U.S. Supreme Court stopped the vote counting in 2000, that was evil. When they undermined the voting rights bill in 2013, that was evil. ​When the former president claimed that the 2021 election was a fraud and was stolen from him, that claim was and is evil. When state legislatures pass voting laws that hamper voters ability to vote or slow the voting process, that is evil.

President Biden’s January 6 speech in Washington and his January 11 speech in Atlanta were speaking truth to the power of evil that hangs like a claustrophobic fog over this nation.

I agree with those Constitutional scholars who conclude that the U.S. Senate construct (two Senators per state) is a victory for white supremacy. Unlike the U.S. House of Representatives, the inability for the U.S. Senate to have a simple majority to pass a law is evil.

There is another sector, the representatives of the religious community, that has been essentially silent on the false claims of stolen elections, the evil actions of the U.S. Supreme Court, new Jim Crow-style voting laws, and reckless gun laws.

Why haven’t religious leaders of all faiths joined together on the U.S. Capitol steps to denounce these false claims and dangerous laws? Why hasn’t the press printed in full length the new federal voting law proposal so voters can understand what is actually in it? Why hasn’t the religious community printed it for their parishioners? Seems like a simple goodwill gesture to me.

The right to vote is essential; to undermine that right is pure evil.