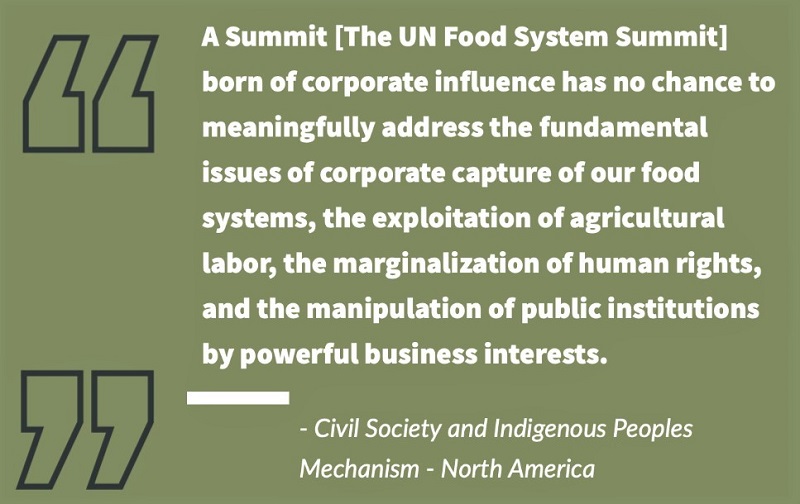 The U.S. Department of Agriculture (USDA) has announced that this week a series of invitation-only U.S. National Food System Dialogue events will be launched ahead of the United Nations Food System Summit (UNFSS) slated for late 2021. As U.S. civil society and food producer groups and self-organized UN Committee on World Food Security’s Civil Society and Indigenous Peoples’ Mechanism (CSM) members, we have substantial concerns about UNFSS and its Dialogue events. From its onset UNFSS has been led by interests affiliated to agrochemical corporations and economic forces that do not serve the interests of people and the planet.

In March 2020, 550 civil society organizations sent an open letter to the UN Secretary-General condemning the UNFSS’ failure to elevate the primacy and indivisibility of the human rights framework to govern food systems and the necessity of civil society organizations to have an autonomous, self-organized, and equal seat at the table. The groups also condemned the World Economic Forum’s involvement in UNFSS and the appointment of corporate agribusiness executive Ms. Agnes Kalibata as UNFSS Special Envoy. Despite numerous interactions, UNFSS has not addressed CSM concerns. A Summit born of corporate influence has no chance to redress the corporate capture of our food systems, the exploitation of agricultural labor, the marginalization of human rights, and the manipulation of public institutions by powerful business interests.

Concerns around UNFSS’ legitimacy and lead-up events were compounded as we witnessed the U.S. government repeatedly undermine negotiations on the UN Committee on World Food Security’s (CFS) Voluntary Guidelines on Food Systems and Nutrition. Similar to U.S. Ambassador Kip Tom’s attempt to derail international agroecology policy discussions, the U.S. government’s representation to the CFS has rejected references to the UN 2030 Agenda, human rights framework (specifically the Right to Adequate Food, the UN Declaration on the Rights of Peasants, and ILO Convention 169 on Indigenous Peoples` Rights) references to the World Health Organization and regional public health authorities, and safeguards against conflicts of interest in public policymaking spaces.

Furthermore, the U.S. National Food Systems Dialogue events are led by U.S. Undersecretary of Trade and Foreign Agricultural Affairs at USDA, Ted McKinney. Mr. McKinney worked almost 20 years for Dow AgroSciences, part of one of largest agro-chemical corporations in the world, Corteva. These elements clearly indicate that the U.S. government is neither engaging objectively in multilateral policy spaces in the UN, nor faithfully representing the needs and interests of all U.S. producers to transform the food system as we need, and thus undermines the legitimacy of the UNFSS.

The COVID-19 public health crisis clearly revealed the fragility of the corporate-dominated sectors of the food system in the U.S. and globally. With rising hunger, historically high farmer debt, unstable producer income, insecure housing, and agribusiness monopsony control of most key agricultural markets and sectors (including farm inputs, processing, and retail), the systemic transformation of food and agriculture sector governance is clearly necessary.

The UN is an international organization in which all countries are supposed to have equal voice, regardless of their economic weight. Mechanisms at the UN, including the UN Committee on World Food Security, allow meaningful consultation, negotiation, and dialogue with civil society and producer organizations from around the world. We call on USDA, the U.S. government’s representation to the UN, and UN specialized agencies, to change significantly their approaches to international food and agriculture policy. In the context of the UNFSS, we urge the incoming Biden-Harris administration to:

We look forward to a response to these concerns.