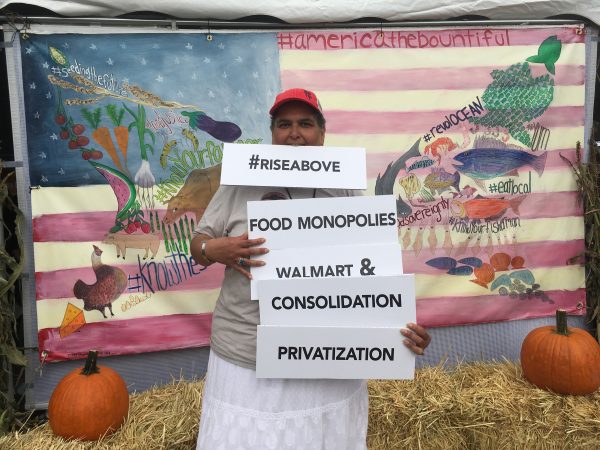 Longtime Coordinating Director of the Northwest Atlantic Marine Alliance (NAMA) and former NFFC board member and treasurer, Niaz Dorry was named Executive Director of NFFC in May 2018 we entered into an innovative shared leadership model with NAMA. This new model put Niaz at the helm of both organizations.

Prior to joining NAMA, Niaz was Interim COO for the Healthy Building Network, helping to apply environmental justice principles to building materials, at a time when HBN was working on homes in the Gulf of Mexico in the aftermath of Hurricanes Katrina and Rita. She worked with Greenpeace for 11 years as a toxics and environmental justice campaigner. During that time, she spent two years in Ohio fighting with communities along the Ohio River Valley against the world's largest toxic waste incinerator. It was during her time at Greenpeace that she began working with community-based fishermen. The span of her work has made her well aware of the problems facing rural communities through concentration, lost markets, crumbling infrastructure, and diminished health care.

Time Magazine named Niaz as a Hero For The Planet for her work. Niaz’ work and approach have been noted in a number of books including Against the Tide; Deeper Shade of Green; The Spirit’s Terrain; Vanishing Species; The Great Gulf; Swimming in Circles; A Troublemaker’s Teaparty; Zugunruhe: The Inner Migration To Profound Environmental Change; Raising Dough: Public History and the Food Movement; The Complete Guide to Financing a Socially Responsible Food Business; Blue Urbanism: Exploring Connections Between Cities and Oceans; and, The Doryman’s Reflection.

She is a graduate of the Rockwood Leadership Institute’s Leading From Inside Out and the Institute for Nonprofit Practice.